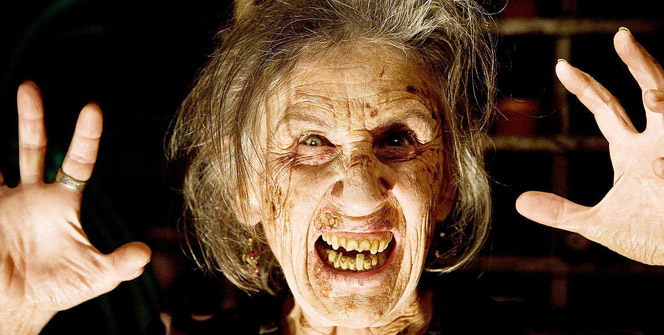 Christine Brown is a loan officer at a local bank. She wants to be promoted to being an assistant manager. Christine’s boss, Mr. Jacks, tells her that they are looking for someone who can make tough decisions to fill the assistant manager position.

Mrs. Ganush is an elderly gypsy woman, who comes to Christine and asks her for a third extension on her mortgage. Since Christine wants to show her boss that she is capable of making tough decisions, she denies Mrs. Ganush’s extension.

Turns out it wasn’t a good idea to mess with Mrs. Ganush. At the end of the workday, Mrs. Ganush attacks Christine in the parking lot. During the fight, Ganush removes a button from Christine’s coat and places a curse on her.

Christine decides to consult a Psychic, Rham Jas, who tells her that in 3 days time, a demon summoned by Mrs. Ganush will come to get her and take her with him – to hell.

Drag Me to Hell is an old school horror film that combines gross-out gore and humor. I personally found myself laughing most of the time (but don’t get me wrong, there’s some good suspense in there also). The acting is good, and there’s a nice twist at the end which I did not see coming.

There’s even a blood geyser